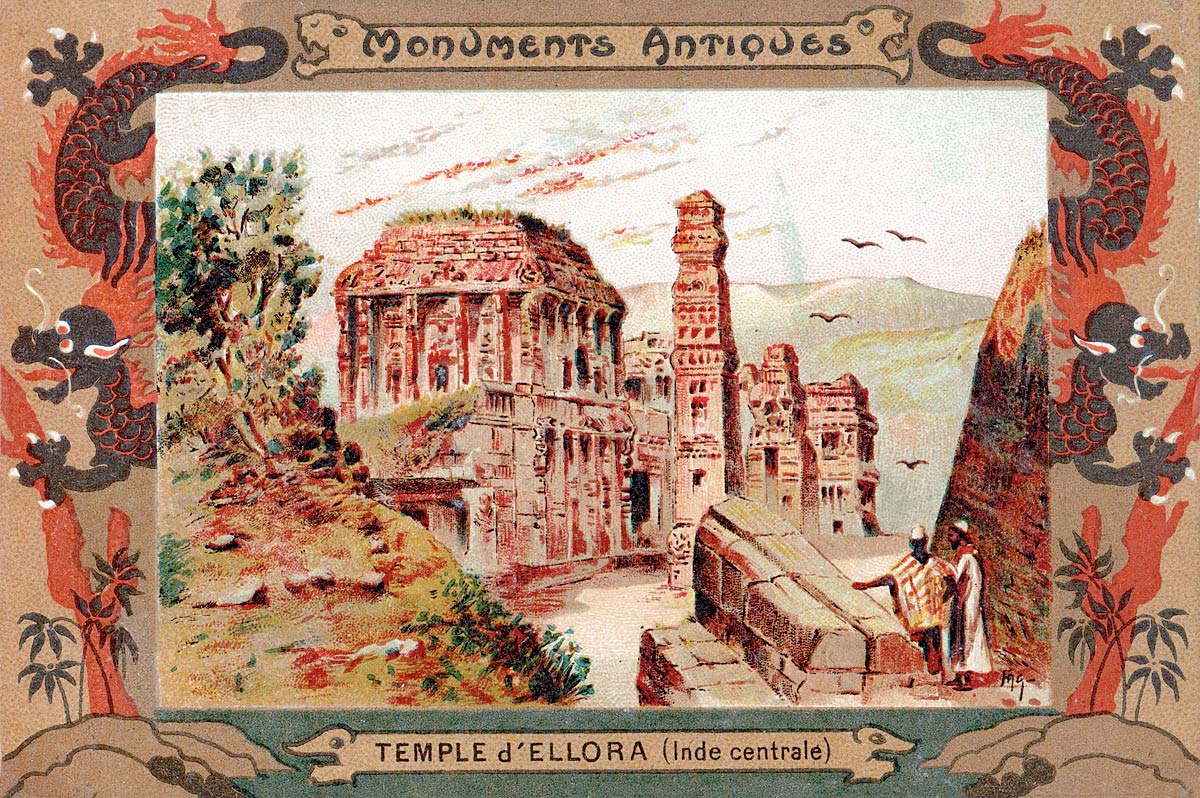 Technically an informational postcard, this sumptuous lithograph nonetheless expresses the confusion in Europe about Asia: the design elements around the view of the Kailash Temple in Ellora are Chinese, and the French text locates it a few hundred kilometers from its actual location even if sourced from the traveler and photographer Louis Rousselet, who traveled through India in the 1860s.

[Original caption] A village in India, once an important city, Ellora is located in the state of the Nizam [actually, it is in Maharashtra], 18 kilometers from Aurangabad [actually, in Aurangabad district]. It has long been known in Europe for its hypogeums or underground tombs, and above all for its monolithic temple of Kailash, which, instead of dark and mysterious caves, presents a grandiose building, carved out of a single block of rock, with domes, columns, arrows and obelisks. From the center of a vast courtyard rises the main pagoda, of which all proportions are gigantic and the ornaments in perfect harmony with the grandeur of the whole. A beautiful portico, covering a double staircase, leads to a vast room whose vault is supported by several rows of columns, and on which the doors of five chapels open. At the rear of the temple, elephants and lions, placed side by side, appear to be carrying the entire edifice on their backs. In contemplating this magnificent ensemble, so full of symmetry, strength and grandeur, one wonders what genius could have conceived and executed such a monument. A defect, a vein, a void in the mass of basalt, and this work of giants would have been only an abortive attempt. The yard is sixty-two meters wide and double in length. You have to enter to embrace the whole of the wonderful Kailash. Long colonnades, lining the base of the scarp, contain, in a series of high relief sculptures, the most beautiful and the most complete in India, all the gods of Hindu mythology. The style of this monument, unique in its kind, being certainly foreign to the architects of northern India, it was believed that the building could be attributed, with some probability, to the Chola princes of southern India who, around the ninth century, invaded Maharasthra. (Louis Rousselet, India of the Rajahs).