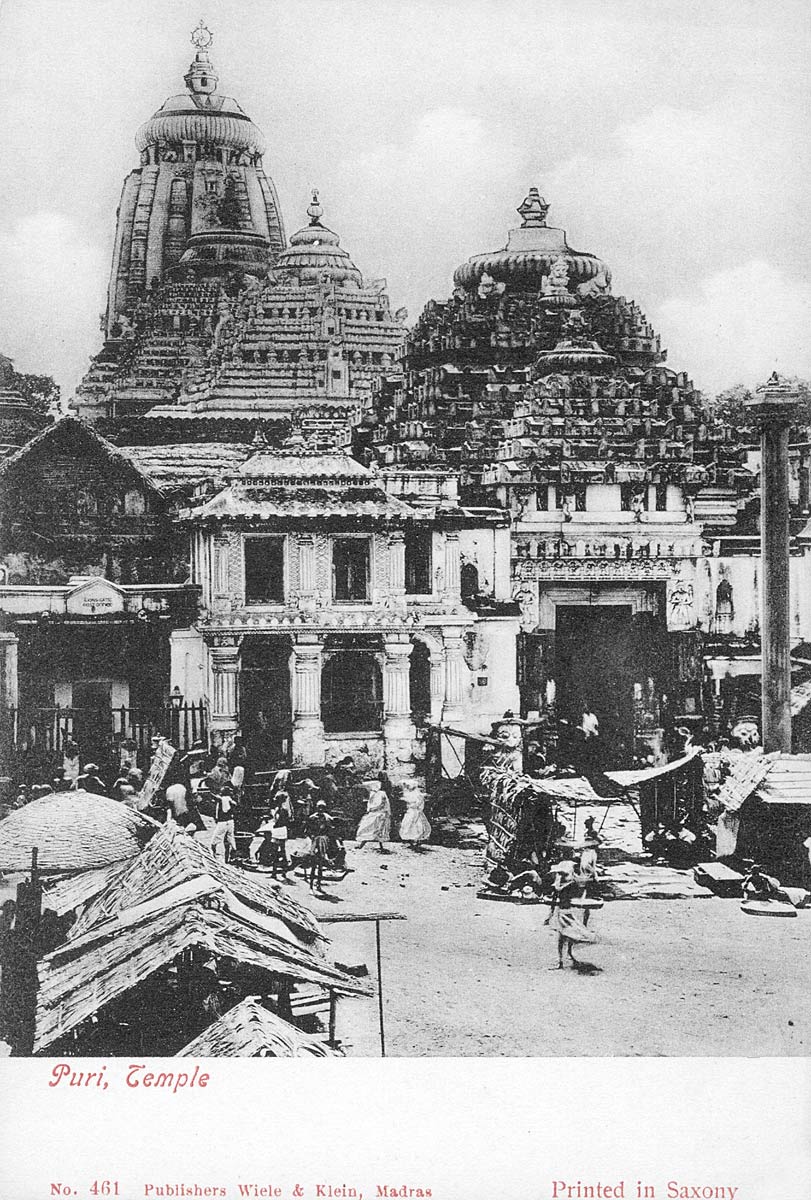 The Shree Jagannath Temple was built about 900 years ago; this court-sized postcard from around 1900 is likely to be among the very earliest from the Indian state of Odisha. The temple is also the source of the English word "juggernaut."

According to Hobson Jobson's account of the word, juggernaut is "n.p. a corruption of the Skt. [Sanskrit] Jagannātha, 'Lord of the Universe,' a name of Krishna worshipped as Vishnu at the famous shrine of Pūrī in Orissa. The image so called is an amorphous idol, much like those worshipped in some of the South Sea Islands, and it has been plausibly suggested (we believe first by Gen. Cunningham) that it was in reality a Buddhist symbol, which has been adopted as an object of Brahmanical worship, and made to serve as the image of a god. The idol was, and is, annually dragged forth in procession on a monstrous car, and as masses of excited pilgrims crowded round to drag or accompany it, accidents occurred. Occasionally also persons, sometimes sufferers from painful disease, cast themselves before the advancing wheels. The testimony of Mr. Stirling, who was for some years Collector of Orissa in the second decade of the last century, and that of Sir W. W. Hunter, who states that he had gone through the MS. archives of the province since it became British, show that the popular impression in regard to the continued frequency of immolations on these occasions -- a belief that has made Juggurnaut a standing metaphor -- was greatly exaggerated. The belief indeed in the custom of such immolation had existed for centuries, and the rehearsal of these or other cognate religious suicides at one or other of the great temples of the Peninsula, founded partly on fact, and partly on popular report, finds a place in almost every old narrative relating to India. The really great mortality from hardship, exhaustion, and epidemic disease which frequently ravaged the crowds of pilgrims on such occasions, doubtless aided in keeping up the popular impressions in connection with the Juggurnaut festival" (1903, p. 466).