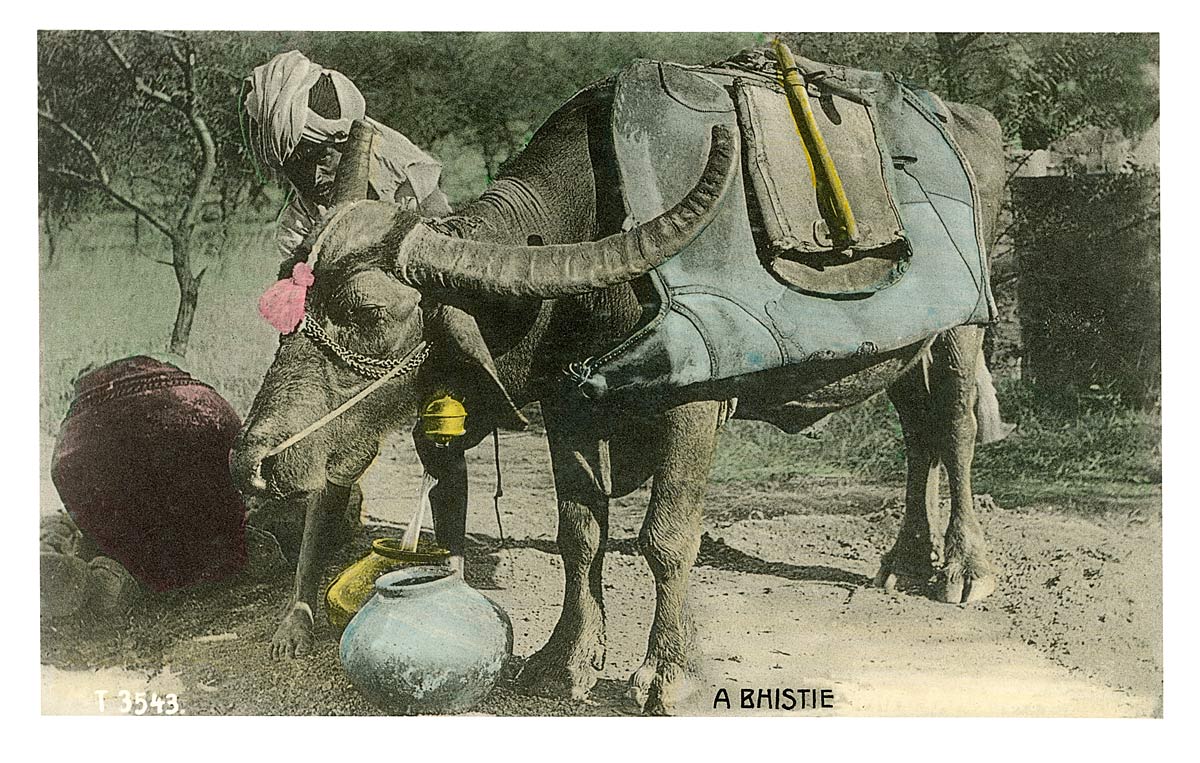 One of the most popular subjects of early postcards was the water-carrier, shown here together with a buffalo. Perhaps Hobson Jobson's definition for what it spells as "Bheesty" helps to explain why (1903, p. 92): "The universal word in the Anglo-Indian households of N. India for the domestic (corresponding to the saḳḳā of Egypt) who supplies the family with water, carrying it in a mussuck, (q.v.), or goatskin, slung on his back. The word is P.[Persian] bihishtī, a person of bihisht or paradise, though the application appears to be peculiar to Hindustan. We have not been able to trace the history of this term, which does not apparently occur in the Āīn, even in the curious account of the way in which water was cooled and supplied in the Court of Akbar (Blochmann, tr. i. 5/5 seqq.), or in the old travellers, and is not given in Meninski's lexicon. Vullers gives it only as from Shakespear's Hindustani Dict. [The trade must be of ancient origin in India, as the leather bag is mentioned in the Veda and Manu (Wilson, Rig Veda, ii. 28; Institutes, ii. 79.) Hence Col. Temple (Ind. Ant., xi. 117) suggests that the word is Indian, and connects it with the Skt. vish, 'to sprinkle.'] It is one of the fine titles which Indian servants rejoice to bestow on one another, like Mehtar, Khalīfa, &c. The title in this case has some justification. No class of men (as all Anglo-Indians will agree) is so diligent, so faithful, so unobtrusive, and uncomplaining as that of the bihishtīs. And often in battle they have shown their courage and fidelity in supplying water to the wounded in face of much personal danger."